This project concerns the restoration of a listed building and its surrounding area characterized by the Ministry of Culture as an architectural work of art. It was built around 1906 on the east side of the city of Thessaloniki in a district known for its countryside (District of Hamidie).

It is a two floor building with a cellar mostly used as a residence. The typology of the floor plan follows the basic style of its time with a central rectangular space surrounded by the rest of the rooms symmetrically along the two larger sides of the building. There are two entrances in its two smaller sides.

A particular characteristic is the typology of its main facade where a vertical three-sided separation is dominant while at the same time it promotes the central section as its main axis of symmetry. Its particular morphological elements are the frames around the openings, serrated strips and the pilasters on its facade. Renaissance elements like imitation of carved stones in strips were used as well as baroque features like a monumental entrance staircase along with the balusters on the balconies and the parapet.

The interventions suggested were to maintain and restore the building intended to be reused as coffee-bar-restaurant. With respect to the style of the building and its history while keeping its historical and architectural features, a series of restorative work is suggested for its façade and its interior.

Initially, the dismissal of previous interventions that alter the arrangement of the floor plan of the building and its aesthetics must be done. A new metallic staircase that leads to the basement from the first floor is proposed for a more functional service for current needs that arise from the new use of the building. The materials and the design of the staircase are selected in such a way to mark the time of the construction of a new operation.

The design of the furniture and the new layout of space aim to promote the old architectural decorations and the typology of the building.

For the outdoor space, soft lighting is recommended with the use of headlights and linear light sources in order to project the particular architectural features of the façade without creating light pollution. 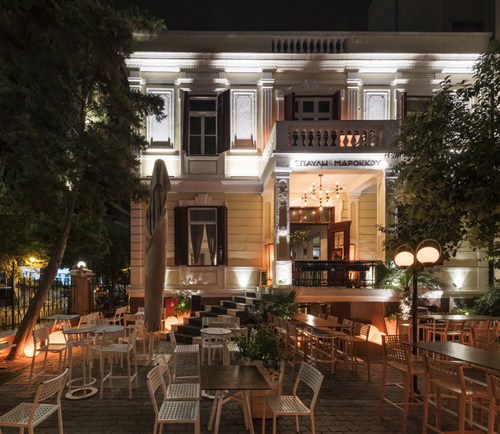 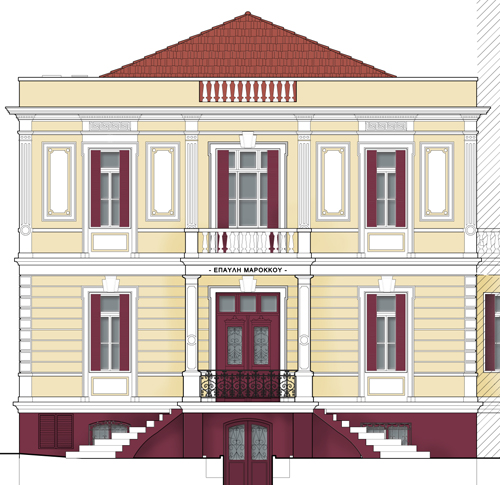